One day in 1932, 200 sailors were holding onto ropes attached to the dirigible, the USS Akron, as they attempted to moor the giant airship to a steel mast in San Diego.

Suddenly, however, the dirigible shot straight up into the air. Some of the men hung onto the lines and were swept up with the ship, soon falling to the ground. Several were killed. After all the rest had fallen, one man kept hanging on. He could be seen as the dirigible soared high in the sky.
People were screaming and fainting. They knew this sailor couldn’t hold on much longer, and any minute he might fall back to the earth and certain death.

But after an hour and forty-five minutes, when they were able to pull the dirigible back to its mooring, the sailor was still dangling from the airship. An ambulance was waiting to take him to the hospital, but he said he was all right.

People asked him how he had held on for so long. He told them he had found he had about four feet of rope, so, while holding on with one hand, he tied the rope around his waist with the other, and the rope held him. He had just been swinging free the whole time!

Many Christians are also trying to hold on and hold out, but instead they give out. Some even fall. But all we really need to do is to wrap ourselves in the promises of God and swing free like this sailor, enjoying the scenery!

Confession: I am strong in the Lord and in the power of His might. I am swinging free in His strength and in His power! 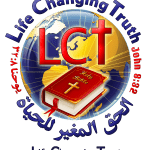